We draw our water from a well. The well is drilled into 300 feet of granite and there are no aquifers under this area. Consequently, the capacity of the well is fairly low, and the refill rate is low. In most summers we have run out of water at least once. In defense of the well, this is normally because a hose has been left running for a few hours, or something has sprung a leak.

This summer we had the well 'cracked' - a process that involves forcing water at high pressure (900 psi) into the well until something breaks. The idea is that you open up fissures in the granite that increase the collection area, and thereby increase the capacity and refill rate. Certainly it seems to have helped (I left the hose filling the pond overnight and we still had water in the morning!)

I decided that being able to measure our actual consumption would be useful.

If you have seen this page before, then continue to read. Otherwise, you may want to read the story so far below.

It turns out that the FT-110 is prone to jamming. GEMS say that you need a 30 micron filter in the feed line. I have a string 5 micron filter, but it appears that enough large particles get through to cause problems. What is worse (I suspect) is that some of these particles are iron or manganese based compounds from the well that are magnetic. Since the rotor in the turbine has magnetic blades (so the hall effect sensor can see them), the particles are attracted to the blades and cause it to jam.

I considered moving to the larger sensor (1/2 inch ports) where they recommend a larger filter. However, the applications engineer advised me to steer clear of any magnetic sensor as it would probably suffer the same problem over time -- not useful in an install and forget system.

My current thoughts are to get the SE100 from Fusion Meters. Interestingly, one of the advantages that they claim is immunity from 'Stalling caused by particulates'. My exact problem! 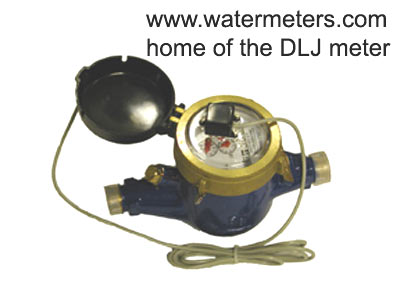 Dealing with Fusion Meters was proving to be difficult -- they wouldn't return phone calls, and there were huge delays. It also turned out that the only meter that they had in the US would give me one pulse per gallon. I finally gave up on them and ordered a DLJ75C (see image to the right) from DLJ. It set me back $114 (including shipping and the relevant unions).

The interface is just a reed switch which is pulsed close by a small magnet mounted on one of the rotating indicators. The good news is that they could supply a 10 pulse per gallon model. The suprising fact was that once I got the meter, I was suprised by the price. The meter without the reed switch and magnet is $40 (including unions). Thus you pay around $70 to get the reed switch and magnet added. If I was frugal, then I'd be including to buy the DLJ75, and glue a small magnet to one of the pointers, and then add my own reed switch!

I now need to mount this in my water supply. Happily, the meter will run in a vertical position provided that the water flows upwards (which it will do in my system).

Update: I've now installed it with the help of a friend. We felt a bit like Laurel & Hardy doing this. A number of times, water squirted out at high pressure, soaking one of us! We also needed to make a trip to Home Depot after we had cut out a section of pipework -- it appeared that my blowtorch was running low on gas and was having problems heating the solder joints. Anyway, it is all now installed with no (obvious) leaks. We also removed the old sensor.

To interface the reed switch to the 1-wire network, I used an old Dallas raingauge board which had died (the capacitor had gone short circuit). I replaced the capacitor and mounted it in a duplex phone wall box. It has a RJ-45 socket for the 1-wire and a phono for the reed switch. To my surprise, it all seems to work, even though the inlet water temperature is significantly below the dewpoint and hence there is lots of condensation around.

I located a (fairly) inexpensive ($70) water flow meter - the FT-110 (model 173934-C) from Gems Sensors - that would give me a pulse for each 1/8300 gallon that I used. This would allow monitoring of  very low flows (water leakage) and yet be manageable under higher flow (our well pump maxes out at about 6 GPM).

The output of this sensor is an open collector driver that can be coupled (with a 2k2 pullup resistor) straight into a DS2423. The good news is that the sensor pulse low - this is the right mode for the DS2423 (it contains internal debounce circuitry that can cause problems otherwise). It also runs off 5 volts.

The pipework between my water filter and the first junction is 3/4". This required a bunch of plumbing parts to get the size down to 3/8" for the sensor. I also wanted to be able to remove the sensor from the system if problems arose. Further, I didn't want to solder the pipework and have the heat conduct to the sensor and melt the plastic.

This means that a pair of unions are required. This is the resulting mess:

It runs (from left to right):

The observent amongst you will notice the drips of water. I need to take all the screw joints apart, clean them, reapply the joint compound, and tighten up a bit more. Also, I suspect that some grease or something in the unions would help.

Installing it was more complex than it looks as the existing pipework was too close to the concrete wall behind it to allow the unions to be installed. Hence more cutting and addition of some bends was required.

This is the graph from the first full day of logging:

This is uncalibrated, but I used the constants that came with the sensor, which is claimed to be within 3% uncalibrated, with 1% repeatability. I am not sure if there is a problem with very low flow rates not registering -- I'm suprised that there are no low level leaks. The sensor itself might stick at rates below it's minimum rated flow.

Back to the main sensors page.